I have a couple , one I purchased off Mr Arbrey sort of all round carp/barbel rod . The other was given as a pressy to my grandson from my good friend , and wooden rod mad Colin Culley to use when he gets out with me

, and is almost certainly a top rod 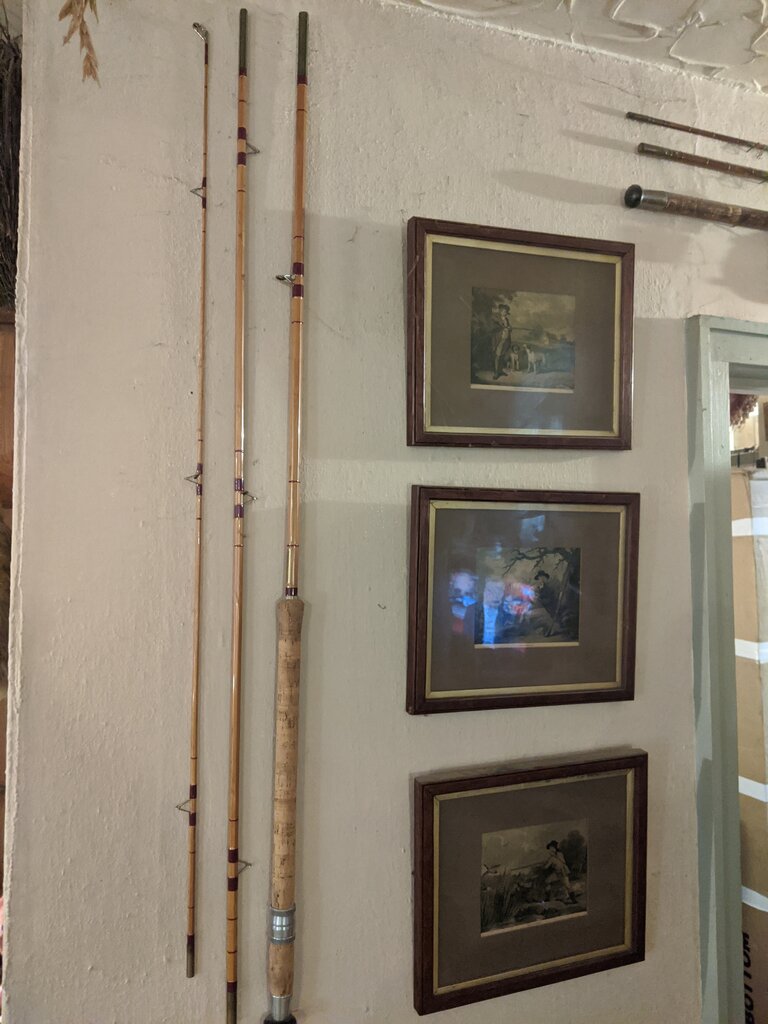 Great gesture from my old friend who we meet through barbel fishing .

Hello Joe , I restore cane rods and may have something to get you going with . I will send you a PM and we can swop details . The advice given in this thread is basically very sound . For the purposes you outline something from the Edgar Sealey or MARCO[ modern arms company] range would suit you best , there build quality is generally very good and they don't command the higher prices like the sought after makers like B James , Ogden Smith , Hardy , Farlows etc . Cane has it's limitations , with a few exceptions you would struggle to find a cane rod to propel 4 oz leads to the horizon or to use in flood or hit and hold situations and they are obviously heavier in the hand than fibreglass or carbon rods . I have sold a few rods to members on BFW new to cane and they have all become converts as it were . In the right circumstances with balanced tackle they are a joy to use

Alternatively, get around the charity shops. I picked one up for a fiver and had a barbel over 8lbs on it, fishing the Trent. It bent wonderfully during the fight!
R

Interesting thread, because I’ve been having a similar hankering to Joe, so the information is really useful. I’ve never used a cane rod, let alone owned one, but the temptation is there. It really started when I bumped into somebody on the W Avon using a beautiful looking bit of wood who turned out to be a rod builder and restorer. Sadly, I can’t afford (or do I mean justify?) one of his products, but the seed was sown
H

A few years ago I made the mistake of finding out that I lived a couple of miles from Mr Barder’s workshop. I compounded that mistake by popping by and having a chat with him. Mistakes followed thick and fast after that. He operates in very unassuming surroundings, renting a barn from friends with a workshop crammed full of rod building stuff including of course lots of bamboo. Your eyes then quickly dart to some pretty much completed rods, ready to go and for someone like me, utterly hopeless at anything practical, I was stunned by the process and transformation.

Back then I was fishing the Kennet so we discussed a rod that he could build for me that would be a stepped up version of his usual Kennet rods. Not that I really had any intention of using such a rod routinely but thought it would be nice to at least relate it’s build to the fishing I was doing then. It is, as has already been pointed out, very expensive but as I was going to have to wait 2 years for it I worked out that a few quid put aside each work should get me there.

My motivation for buying it was mostly because I totally admire the craftsmanship and love that goes into building these rods and that it’s surely a dying art. I feel a bit the same about centrepins. So I felt like I was buying a bit of history, something that, in a small way would help to keep the tradition going.

I never got to use it on the Kennet but have used it a couple of times on the Wye, rolling meat. It certainly feels very different to my other rods. Certainly fun to use and there is something about a sense of going back in time and striping back the fishing experience. But for 99% of my barbel fishing, I will reach for the Torrix. Every now and again though, it’s great to take the Barder out instead .

Anybody got any feedback on these?

Chapmans 500. Absolutely perfect for chubbing. And has the nicest most balanced feel

Was thinking exactly the same thing myself, and this post has shed some serious light on the subject

still got my dads old cane rod at home somewhere, remember him letting me cast it as a young lad.
Andy Bebbington
http://andybebbington.portfoliobox.net/
www.flickr.com/photos/andybebbs/
M

Over the weekend I used an Andrew Davies Roach perfection, the next day I used a Fred J Taylor roach rod, I have a good collection of cane rods, also a pole from my great great grandfather purchased in the early 1920's which is often, I just like going back in time and the feel you get from catching fish on a cane and pin, is to me far better than a bit of carbon and a fixed spool reel, though there are occasions when if I am trotting all day, then I use an Acolyte at 83 i'm not so strong as to hold a cane rod all day for trotting.
M 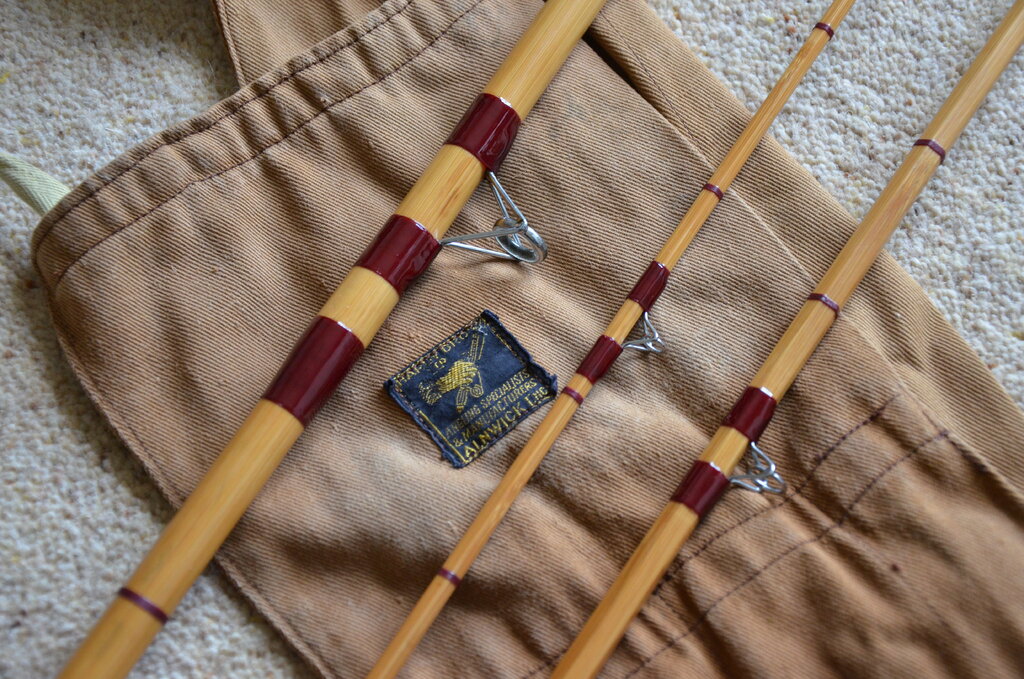 Joe Winstanley said:
Some brilliant info there gents, it's given me much food for thought.

If I were you Joe I'd try to borrow one and use it for a few sessions. I've owned and used a Hardy Avon Mk. IV, and yeah, they're nice ...but I sold it on. That was years ago, and I reckon what with me using a Torrix and F/S Hi S SU's these days, they'd be a massive (probably negative) 'shock to the system' if I used one now.
AKA Freeliner

It's nice to be important, but it's more important to be nice (Scooter )

I've got an Ebay alert on for Avon rods so get to see all the cane rods including mk 1V Carp rods as they're advertised. It strikes me that there are far more B. James and other famous name rods for sale now than at any time in the past.
B. James in fact was just a tackle shop in Ealing not a major rod maker.
I suspect a lot of these rods are in fact counterfeit.
Or am I wrong?
M

What makes you suspect that Paul ?
M

Just had a quick look in Kevin Cliffords History of Carp fishing . There is a fascinating and very detailed / well researched chapter on a history of Carp tackle . Kevin states that B james made approx 15,000 MK 1Vs split cane rods, I presume he is referring to the MK1V carp rods and not the Avons . I think if you research carefully counterfeit rods are fairly easy to spot particularly if you have them in your hand . I must have had over 40 pass through my hands and have never seen one that looked a wrong un . There are however a fair few rods that come up for sale that are stated as MK1V Richard Walker carp rods but the transfers . ferrules , rings are usually wrong . The traditional anglers forum is the go too place for info on all things cane , there are some very knowledgeable people on there and its full of information open for all to see. I am not saying there aren't counterfeit rods out there , modern technology means that the transfers would be easy enough to replicate but to try and knock up a replica with the correct rings ferrules etc would be pretty expensive , hardly worth the bother unless you were trying to pass of one of the very early first version models which co command a premium price
Last edited: Sep 8, 2020

Mike Hodgkiss said:
What makes you suspect that Paul ?
Click to expand...

Just the amount of them available, they used to fetch loads of money because they were rare, it seems today they're not.
Of course it could be there's just a few and they're not selling and being re advertised.
M

Paul your correct, there are a lot of counterfeit rods out there, as you mentioned there are several really top class people on TFF who know what is going on as regards cane rods and centrepin reels.
You must log in or register to reply here.
Share:
Reddit Pinterest Tumblr WhatsApp Email Link
Top