I just wanted to put up a little post about these hooks.
I know the subject is talked to death and rightfully so people stick with what they like and feel confident with but I’ve been using these hooks now for just over a year and I don’t think I’ll ever look back again. If you are looking for another hook pattern then I would Personally give these a 100% thumbs up. Baring 1 break off I haven’t dropped a single fish on these so far (touch wood) and I haven’t had a single take not result in a self hooking case scenario.
They have an angular bend in the bottom of the hook which reduces twisting and ejection so they hold on so much better than a conventional curve
It is a proper wide gape hook with a slightly unturned point so you get the advantage of not dulling the point on stones without hindering the size of the gape too much. I’ve gone on to these from previously using Gardner and drennan Continentals, and while they were good hooks these claws absolutely smash them to death imo.
If you are using a hook and it’s working for you then stick with it. If you feel the need to change then I can’t recommended these things highly enough.
Please no barbs and barbless debates on this. We’ve been there. I’m just sharing a product that I don’t believe is used much for barbel fishing yet to me it’s the best hook out there for the job.
Mind those pinky’s with them mind. Nash claim a point equal to hand sharpened hooks with their pin points and I wouldn’t disagree with it. They are viciously sharp.
Last edited: Jun 19, 2020

I use them, very good hooks.

Neil Smart said:
I use them, very good hooks.
Click to expand...

I thought I was the only one.

Richard Isaacs said:
I thought I was the only one.

Someone recommended them on here some time ago, and I always check out the product, I actually have a lot of faith in recommendations on here, that's why I end up with a load of gear.

I was actually looking at these the other day when trying some barbel rigs as I use them for carp fishing, and was thinking they would be good for barbel. Will have to give them a go!!

How do they compare size wise with other wide-gape hooks Richard? I find it tricky buying different makes of hook blind because they seem to vary widely in size.

I see the Claws only have a very slightly beaked point which looks good. Generally I prefer straight points because I think they are better at pricking fish, but I’ve got fed up with the Drennan barbel hooks damaging the points really quickly and losing sharpness.

Good to see they do a size 10 - how does that compare with the size 10 Drennan barbel hook?

The drennan specialist barbel hooks joe? I think those are practically useless personally I don’t know what on Earth Drennan were thinking as they just wreck the points for fun being completely straight. I tried them once when they were recommended to me in the tackle shop but never again.
These claws are a bigger gape but they are not an aggressive hook angle. The point is slightly turned in and unless you get latched up on a nasty snag they come back sharp. I’ll measure a size 10 for you. 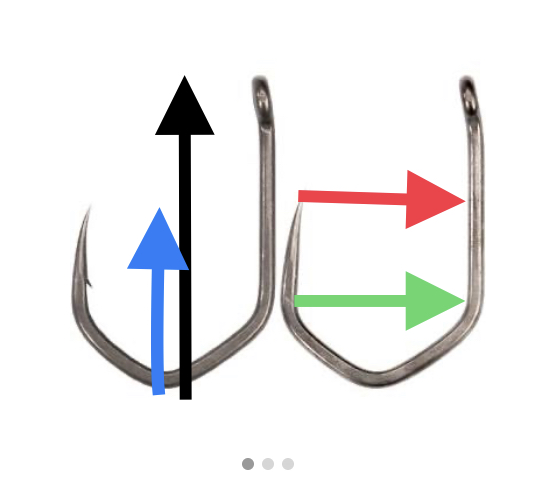 Red arrow from inside point to inside hook shank 6.5mm
Green arrow at widest point inside dimension 7.1mm
Black arrow total height 13.5mm
Blue arrow from point to outside of the bend 9mm.

They do a version called the claw floata
These are apparently for use with surface baits. I don’t know what the differences are as the look identical but I just use the conventional claw

They look interesting.
I don't know what it is with barbel but I lose fish on wide gapes, I now only use curved hooks and don't lose fish.
Korda curve and Nash fang, though the latter are a bit lethal!
Swiss

Rhys Perry said:
They look interesting.
I don't know what it is with barbel but I lose fish on wide gapes, I now only use curved hooks and don't lose fish.
Korda curve and Nash fang, though the latter are a bit lethal!
Click to expand...

That’s what it’s about Rhys. Finding something that works for you and sticking with it.
I was a drennan Continentals man for years and they are a great hook. Total confidence in them but I would drop the odd one or two in a season and I started looking around. Not because I didn’t like the drennan CB’s but because I wanted to see if I could find something better and drop even less. I tried the drennan barbel hooks which I hated, I tried gardners and kordas very aggressive hooks and I wasn’t keen then I went onto these.
I don’t catch a lot of fish on the waters I attack but I do get some special ones Occasionally so dropping one is a big deal.
So far we’ve got a 100% hit rate that every take has resulted in a self hook and every hook (baring 1 that smashed me in a snag) has resulted in a landed fish.
I’m sold on them as my favorite hook pattern to date.

Richard Isaacs said:
They do a version called the claw floata
These are apparently for use with surface baits. I don’t know what the differences are as the look identical but I just use the conventional claw
Click to expand...

Cheers Richard, I'll have to give them a go.
Swiss

Ain’t no barbel on the planet that’s gonna straighten one of those.

Richard Isaacs said:
Ain’t no barbel on the planet that’s gonna straighten one of those.
Click to expand...

Alan Palmer said:
The finer wire flota version is the one I would worry about
Click to expand...

Lovely hooks Richard, a good friend swears by them, shame I have nigh on a 1000 teflon rapier to get through, I really dont think I can reach that goal before 100...
Don't ask me where I caught them.

Jon Frisby said:
Lovely hooks Richard, a good friend swears by them, shame I have nigh on a 1000 teflon rapier to get through, I really dont think I can reach that goal before 100...
Click to expand...