Staff member
What have you got planned for the New Year? Apart from that small matter of moving house oddly enough "North of Bedford", three or so bird watching trips, the planned purchase of another dog although she whom should be obeyed seems intent on calling it a bear, because of the new dog or bear another car, due to the new house I should expect a fair amount of decorating and I suppose it is fair for my employers to expect me to show up to work occasionally and I am quite hopeful of getting some time to go fishing as well. No this is not an oh woe is me cry as I suspect that I get away lightly compared too most but one of my less than subtle observations of the hectic nature of modern life.

Have a think about those questions as most of my fishing is tied up with answering them or questioning them and the advantage of having on ongoing series is that I can take my time in exploring and answering them.

After all that semi-self management mumbo jumbo most of this monthâ€™s missive is going to be about making bait. Starting with paste then the various things you can do to the paste to make them what are euphemistically called boilies. Going back to my list of questions briefly as I type the garden pond is very much frozen over so there is next to no chance of barbel feeding so what best to do with my non-fishing time? Make bait as I doubt if even the chub are feeding today.

I see a slight problem on the horizon when someone asks what brand of bait should I use? That is dependent on a few factors the most tricky is how you are going to apply it which will take up another month at least, confidence and cost. Availability is no longer a problem as no doubt you will have noticed that if you walk into any tackle shop you will see a vast range of base mixes and flavours. Unlike the bad old days when you had people mumbling about eye of newt, caseinates, semolina, wing of bat under their breath searching for the best of all baits. The majority of the shop bought mixes will catch barbel. As you will see from the picture my personal choice is the Essential Big Barbel range of baits but as bait is the most subjective of areas; you pays your money and takes yours. 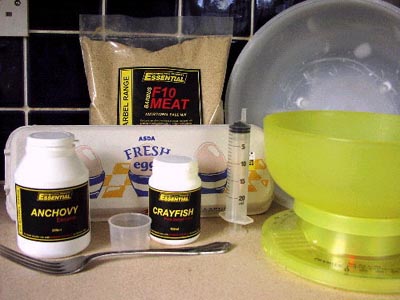 Speaking to people on the bank and on the BFW message board there seems to be a bit of nervousness when it comes to making bait so the first thing I have to say is relax, it really is not very difficult. In fact itâ€™s very easy! To make it easier still I would suggest you start by just making one egg mixes so even if you do make a mistake it can be disposed of without too much worrying.

Clean mixing bowl, if you decide to use a plastic one make certain that if you are not the owner of the bowl that the owner does not mind the possibility of it being returned a slightly different colour. To avoid the chance of a misunderstanding I tend to use a stainless steel one.

Clean syringe for exact measurements of additives and flavours.

Base mix and additives

Unlike real cooking you add the powders to the liquids so to get the show on the road crack an egg and put it into the mixing bowl.

Most of the mixes you can buy have suggested additives and the amount you should put in for a three or four egg mix on the packet so first of divide that amount by three or four, you are only using one egg. In the pictures that go with this I am making up a one egg mix of Essentialâ€™s F10 Meat. For a 3 egg mix Mr Willmott recommends that I should add 3ml of Crayfish for 3 large eggs so I have measured out 1ml and 10ml Anchovy Essence so that is 3ml. Please pay attention to the amount of additives you put into your bait it is important. Remember that you can always add but never take out.

Add the additives to the egg and whisk with a fork until it is thoroughly mixed. One quick point you are not making a cake here folks so do not get too excited about the whisking. You are not looking for soft peaks or anything like that.

Time to dig out the base mix and if you have some scales handy to start off with it maybe an idea to weigh out 4 ounces or 100 grams. As you gain confidence and experience you wonâ€™t have to worry about doing this but as a starting point it is not a bad idea to know roughly the quantities involved. You will not have to use all of this!

Slowly, this is the real key to it all, add the base mix a little at a time to the egg and additives stirring it in with a fork.

When it gets to the stage where the mix is too stiff to mix with the fork time to get your hands in the bowl. You still have base mix left over donâ€™t you? If the answer is yes well done if not send me an address and Iâ€™ll send you a dunce hat! Keep adding the base mix SLOWLY making certain that it has all been worked into the mix.

When you start using your hands youâ€™ll find that the mix is sticking to your hands but as you continue working it starts to change from a slightly gooey mess to something resembling paste.

Carry on adding the base mix. You are looking for the point when the paste no longer sticks to your hands. Still soft certainly but firm enough to be shaped and retain that shape.

Once you have reached that stage time to stop for a cuppa and leave to paste covered by that tea towel I mentioned earlier. The reason you do this is that some base mix ingredients take longer to soak in the liquids than others so best to give it ten to twenty minutes to make certain that this has happened.

If after having left it you think it is still a little wet add some more base mix, sparingly though. The only state of affairs you do not want is to find that the paste is too firm and breaks up too easily. If you where planning on making boilies or a reasonable paste forget it if this happens as they will break apart at rolling or boiling or fall off the hook. Your best bet is to work in a little water and use the paste as a paste bait instead or use it as feed.

Refreshed? Good. Now you have a couple of choices either go fishing, freeze the paste until you do or make the paste into boilies.

Now you have made paste youâ€™ll see that there is nothing really to be afraid of. If you need more bait just increase the number of eggs you use and everything else to recommended levels.

I will start on the boilie making process next month.

Unfortunately I must leave you this month by saying I would like to say a heartfelt thankyou and goodbye to my bait making assistant and resident bait thief over the last few years as she was enlisted by a celestial boilie making factory. Sheâ€™ll love that. 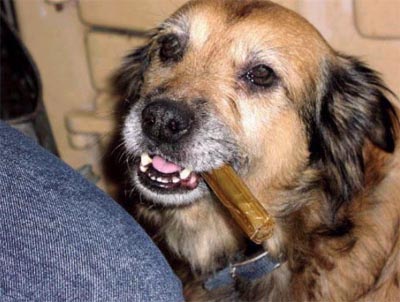 Till next month â€“ Andy