Has anyone used these baits?? Starter baits?
Is the quality any good. Looking to buy a bulk bag of pellet as it’s obviously cheaper this one works out about £2.23 a kg 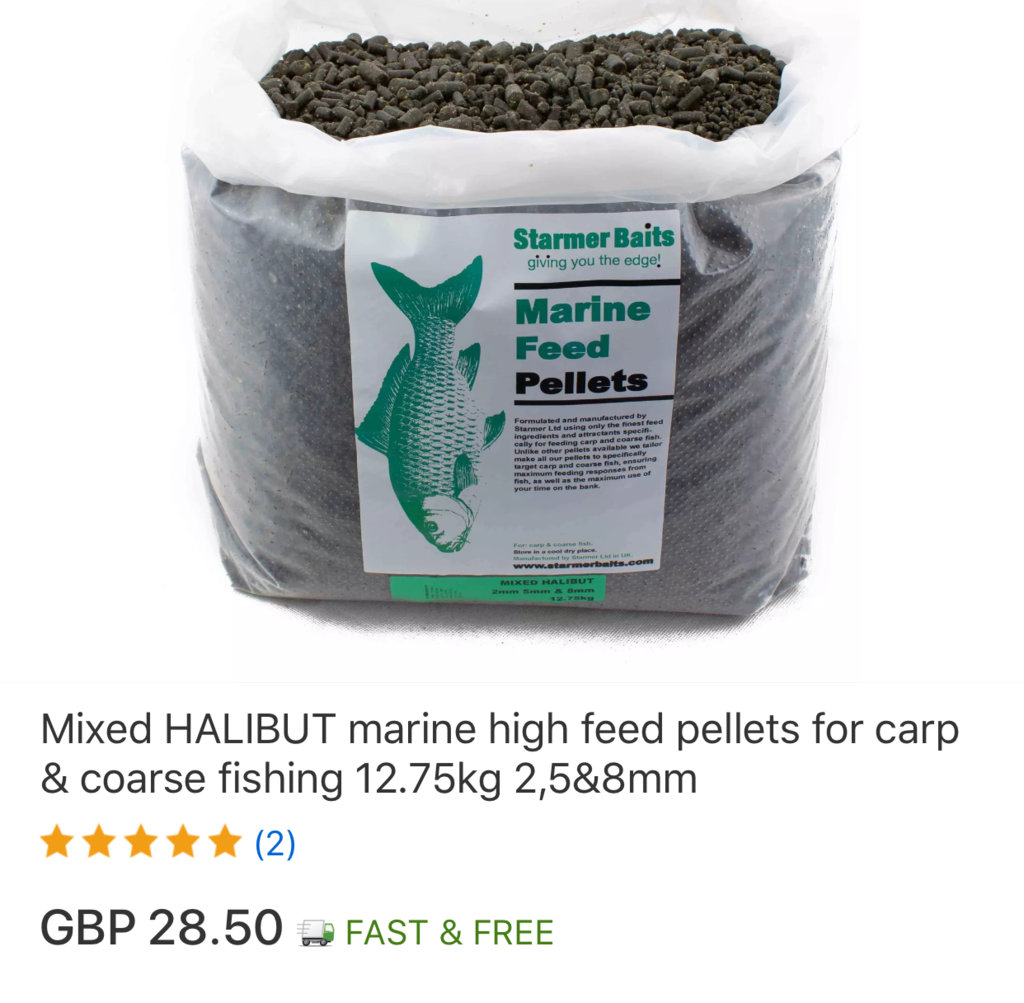 All round angler, www.facebook.com/diaryofathamesfisherman
G

I can't comment on that supplier. the bulk price looks OK.

But what i wanted to say is it makes me realise what a good deal we get at the Bobco shop in Leeds, where you can choose any 3 bags of any size or colour pellets, mix and match, totalling 0.6 kg per bag, for £5, with 10% loyalty card points and 20% off on bank holiday weekends, so works out at about £2.50 a kilo with the loyalty card and the same as your bulk price on bank holidays (which is when i stock up with bags & bags & bags ...). I'm talking feed quality rather than hookbait of course. End of advertisement!

I'm also just finishing off cooking the last of a sack of hemp from Hargo Feeds in Leeds that has lasted me just over 2 years at a great value price (can't actually remember the price now, but I probably mentioned it on here 2 years ago!). Really end of advertisemnts this time.

I need to get some help too, have been scouring various websites and ebay looking for a bulk bag.

Ive just discovered an Animal feed store close to my house that I didn't know was there so I'm going to pop in there soon and take a look at what they have.
All round angler, www.facebook.com/diaryofathamesfisherman

Tony. I bought some of that bait..
Still got 8kg left. Didn't like the dusty texture.

Thanks @Graham Elliott is it like a quick breakdown pellet rather than the standard halibut pellets you would buy?
All round angler, www.facebook.com/diaryofathamesfisherman

ah ok, I might avoid them then and keep looking, thanks
All round angler, www.facebook.com/diaryofathamesfisherman

I was going to suggest buying direct from Skrettings, the manufacturer; however they now sell bulk through 4 suppliers:

I suspect all of the big fishing bait companies are selling us the same aquaculture halibut pellets at a vastly inflated price, as they certainly don't make their own!

If you want mixed pellet sizes, then buy with friends and blend the different sizes.

£1.59per kg with postage, although that's still cheap and looks a better quality pellet that the original one I posted. thanks for the link
All round angler, www.facebook.com/diaryofathamesfisherman

On a slightly different matter, what is the shelf life of the pellets if kept dry and wrapped when opened.

I have packets of pellets that have been open all season that I haven’t used for one reason of another and would have no issues using them.
All round angler, www.facebook.com/diaryofathamesfisherman

Thanks, I’ve some from last year that I’d considered zizzing up with fresh oil. I’ll give them a try first before wasting money on oils.
R

Not sure how many shops there are but i use Cookes pet shop ( i think theyre a pet shop ) theres one in Rotherham and one in Sheffield for certain .
Good prices on pellets and stock the skrettings.

Sites not brilliant, i cant see the hallibut pellets on there but the store in Rotherham has them forcsure.
D

Tony Stone said:
I have packets of pellets that have been open all season that I haven’t used for one reason of another and would have no issues using them.
Click to expand...

You obviously don 't have a mouse/rat problem then Tony. I now have to keep all my bait (apart from tins) in robust plastic storage boxes with lids while I endeavour to get rid of the mice that have found hemp, pellets, boilies etc to their liking. They are also very good at trashing tackle bags, with or without bait left in them! Ho hum.

Touch wood, no issues with mice or rats but then my gear is stored inside the house. I would never store it outside in a shed or garage again, replaced too many nets, bags and holdalls over the years to go back to that!!
All round angler, www.facebook.com/diaryofathamesfisherman

I recall being told that the vast majority of pellets are produced by only four different manufacturers. Obviously they have become very popular and some tackle companies do make thier own, however certainly a few years ago before the pellet boom Angling was a very limited market compared to aquaculture. The quantities that get used up by commercial aquaculture are astounding. In some cases we are likely paying for marketing but I expect it’s often grading too, if the feed is no longer suitable to feed to animals for human consumption etc. Often a give away with cheap feeds is the ash content, lots of cheaper feed stuffs will contain significant amounts of ash as a Phosphate donor for growth as apposed to more expensive ingredients. I doubt most fishing baits give that kind of break down but you could ask?
For the last few seasons I mix and match, using cheap halibut pellet as a bulk feed and a quality of more premium pellet added for draw. For example, without giving too much away, I may use 70% generic halibut pellet, 5% boillie, 25% premium boillie marching pellet. This reduces cost significantly and I don’t think it detracts from the attractiveness of the bait and baited area.

Does anybody think the halibut pellets that are about now have changed? I bought a couple of kg bags of 8mm the other week from probably the most popular brand and there nothing like they used to be!
D

Lee Young said:
Does anybody think the halibut pellets that are about now have changed? I bought a couple of kg bags of 8mm the other week from probably the most popular brand and there nothing like they used to be!
Click to expand...

Yes absolutely they have got bigger and less oil in fact a bit crumbly and dusty.
Tackle shop tried to convince me otherwise !

Iv switched to robin red pellets. But yeah I can remember buying buckets of halibut pellets and they were really oily but the last few bags Iv brought never looked the same

Those Starmer pellets are very dry and powdery, and very difficult to make mash with. But being so dry they're great if you want to flavour your own feed pellets.
AKA Freeliner