I was watching a Des Taylor piece on FB a few weeks ago, basically because @Lawrence Breakspear was on as guest. It was a good show, many thanks Lol. During the show the question of feeder size was raised and Des commented that he didn't like/use large feeders, preferring relatively small cage size to weight used. And although I don't think Lol verbally agreed with Des, he did seem to nod this through in agreement.
Now both Des and Lol have many more fishing hours 'under their belt' than me, and have had a lot more success than me too ... but I strongly disagree with their thinking and sentiment on this question :
My thinking is, if you want to introduce 'X' amount of feed then it's best to introduce it as quickly, as efficiently, and as least 'swim disruptively' as possible. If I was using a spod or a dropper I'd use the biggest one I could swing out, as opposed to swinging out a small one many times. I'd prefer to add 3 large spod-fulls rather than 10 small spod loads. And I think along the same lines re. feeders. Yes I may reduce my feeder size later in a session to keep just a trickle going in, or change to a straight lead/lead in a PVA bag, but initially I'd use as big a feeder as possible (obviously to suit conditions). But all the feeders I'd got (loads 'n loads) had cages much too small (IMO) for weight required for swim. I'd got some that had large weights and tiny cages, and I was thinking "What's that all about?" so in the end I turned to Paul Fisk (Fiskys Fabulous/Famous Feeders ...FFF) who made me exactly what I wanted (to my spec, and to a really high standard, and at a great price too).
So below are 2 typical shop bought feeders, a 50g cage and a 60g open end, plus a FFF (64g). Wow eh! What are your thoughts? 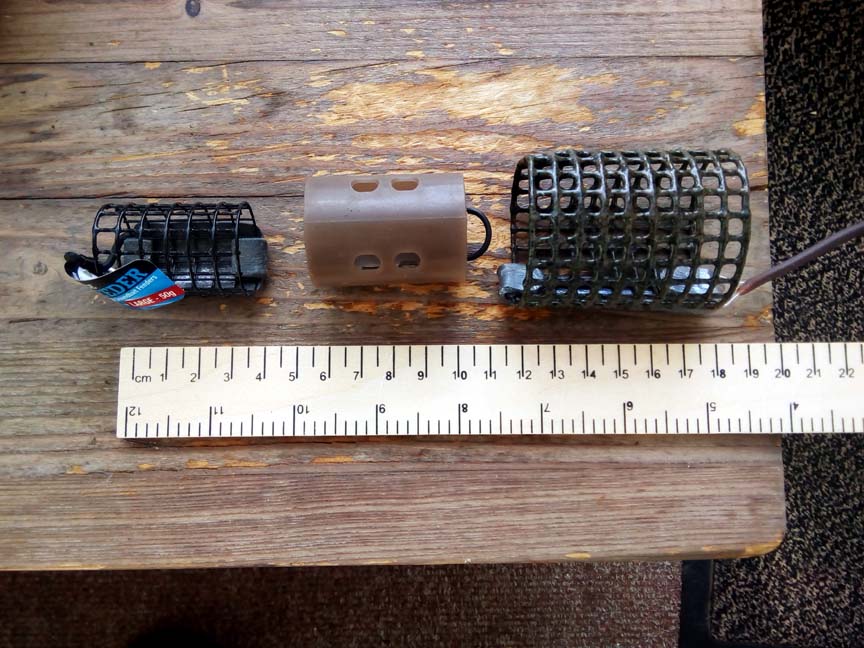 It's nice to be important, but it's more important to be nice (Scooter )

If we are talking river fishing Terry, then I agree with you. Even a large feeder deposits a relatively small volume of feed which is quickly distributed down stream by the flow. Like you I tend to use a large feeder in the first hour or so and if I start to get indications of feeding I change to a lead.
On still water I often use smaller feeders because the feed stays next to the hook length.

I’m not really an experienced angler in this field of feeding/fishing as I’m generally not trying to get a lot of bait out on the waters I fish. Can’t remember the last time I used a feeder and my bait dropper is plopped in a couple of times throughout the session with a few free offerings.
However in this situation of getting a lot feed out initially I’d agree with you Terry. Larger capacity and fewer casts makes more sense.

id agree with Des when talking about using the feeder for actual fishing once the bait is out and your simply keeping things topped up. In this case I’d go smaller or swap to a lead and use a small pva mesh or stringer. The feed is now out, the swim has rested so now I want to just get a bait out and keep swim topped up with as least disturbance as possible.
like I say not my usual style of fishing and quite foreign to me so my reply is based on theory.
P

I think it all depends on how little or how much you want to feed .And also how long the session is , if I’m going Barbel fishing say for 6 hours , I always put 3-5 big feeder fulls in a large feeder out on each rod, Then normally I will let it settle for 30-40 minutes before I cast both rods out.Then if no bites I will top up every 40 minutes ,I’ve found this way bites will come to one rod, so I normally swap one rod to a bomb and bag and found all my doubles have come to that rod , and smaller Barbel to the other rod.
On the wrong side of the ribble

I do some feeder fishing and would agree with above. Nice big feeder to introduce as much as possible with minimum number of casts but I don't fish the very big waters like the tidal Trent. If using two rods I only fish the feeder on the upstream rod in the hope the fish pass the downstream bait as they head upstream.

Nice thread a good read. I can't really add that much to it but am keen to read people thoughts. I had 2 days on the wye (last wk of season). I was fishing large cage feeders with 70-90 gram weights. When loaded they were 4 litres ounces I'd guess. I couldn't help but think the disturbance was significant. I guess there could be an argument the noise could draw fish if used to feeders and pellets regularly. I noted the difference if feathered down. I caught a pb that came to a straight lead fished down stream of the feeder. Draw what you will could just be coincidence. I did wish I had a bait dropper as only fishing a few rods out I would of liked to try it. That said a very experienced angler off here suggested the more I feed the more I'd catch in rivers like the wye.
j r kennard

I think it depends on what bait you are using and how much feed you want to introduce and of course how many bites you are getting. If using maggot I would use a large black cap to start and recast every two minutes until bites started, if no bites after an hour I'd either try a smaller feeder or straight lead (assumes Im in a known swim that produces). If using pellet then again Id use a large black cap but only recast every 10-15 mins until bites start, if no bites after an hour (less in summer) I'd move. Personally I never use a cage feeder and ground bait, just haven't found the need, 3 and 4mm pellets in a black cap catches for me all year round, more convenient.
You must log in or register to reply here.
Share:
Reddit Pinterest Tumblr WhatsApp Email Link
Top