In the deep dark chronicles of history before there was such a thing as a home PC let alone a tool like the Internet people used to rely on a strange method of communication called the letter. Now back in these dim and distant times there were some rather smart cookies who liked fishing for a species that had a mythical standing at the time called carp, how times change. Our aforementioned heroes had a bit of a problem. They wanted to catch these carp creatures but each individually did not really know enough to do it on their own to the point they would consider themselves successful however they reasoned if they got together and pooled their resources maybe just maybe their dreams would come true. After due consideration they decided that the best way forward would be to use these letter things to converse with each other. A kind of rolling letter that went to each one in turn so that they could add their thoughts.

Most of you will know that the above refers to the Carp Catchers Club and what is probably the start of modern specimen hunting or specialist fishing as it has started to be called over the last decade or so. Not only for carp but also barbel, chub and most other species. Did their dreams come true? Yes most definitely I would say.

So what has that got to do with this? You maybe wondering about now. Well it occurred to me that within the contributors of BFW we have a fair number of anglers that have interesting and unique views on our branch of angling and while the message board certainly brings most things to light that there are still aspects that could be covered. What is the best way of getting these perspectives I wondered and the idea of a Rotary Letter came to mind. Hardly a blinding flash of originality I’ll be the first to say but it should lead to some interesting discussion.

At the time of writing this idea is about three days old (postscript ha after moving house it is more like 8 months old !) so after approaching Andy Frances to see of he would put it online and if it was a worthwhile idea and a quick, ha!, chat to Bob Gill and Ron Chant a format has been agreed. The rough idea is that each letter is between 1000 & 2000 words. If the writer is happy to do photographs and pictures great if not fine as long as you can communicate your ideas in words. You’ll get the gist of it after a few weeks so do not be surprised if you get mail asking if you are interested in participating if I can find your email address this is likely and do not be shy in volunteering just drop me an email. As time goes on I might get the odd contributor from outside of BFW and maybe even outside barbel fishing just to get a completely new view.

So where to start?

There is an aspect of bait application that I must confess I cannot get my head around. I know it works for other species and can be highly successful for barbel but as soon as I try it apart from in one set of circumstances I feel as if the blank is written and it is just a matter if waiting to go home. That application is single bait fishing.

I met a couple of anglers during the summer that spend their time fishing two rods with hookbaits only. The only time they fed was when the bait fell off. Did they catch? Yes regularly but I just do not feel happy doing it. I said earlier that there is one set of circumstances that I do and that is rolling meat. Deadly in the right hands and great for feature finding but the whole ethos behind it is searching for the fish not waiting for the fish to find you. Now these anglers are new to that stretch of river by their own admission and I have never seen them before in the six years or so I have fished it. After meeting them once and taking note of their success, as you do, next time I met them I took particular notice of their swim selection and watercraft to choose where to place the hookbaits. Both went for right hand side of the swim in the middle and left hand side of the swim in the middle in the first two available swims. A little chat further revealed that they used out of the bag ready mades. It was an awful night that had me catching bream but you guessed it one of the guys caught a fin and scale perfect 11 pounder. Three nights later similar scenario. First two swims available albeit different one’s similar result.

Now that they caught is not really the issue but the methodology that brought them success has had me wondering ever since. To my mind this is based on catching travelling fish that move through their swim and hoping that they make a mistake. On a stretch that holds barbel this is not that silly but I would have thought that the odds of fish making that mistake every time they went out, well every time I saw them, would be slim. Slim compared to my approach, which is generally fishing areas that I know hold fish that I am interested in catching. I am not moving bait to them, I am attracting the fish to where I want them to feed and hopefully the right fish will have a temporary lapse of reason due to the baiting situation I have created using quality baits.

You may hear the bitterness of a season spent chasing fish that have not been willing to feed it seems so far as I have been fishing specific areas for specific fish. However even if I was fishing for whatever came along, and here is the rub, that I would have caught anymore using my baiting techniques compared to their single hookbaits. 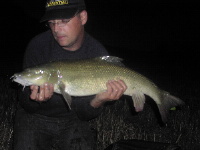 I do get it right, at times ​
Logic, well my version, tells me that I would but there is a nagging doubt in my mind that I am going to have to further experiment with next season. Any bets that I blank?

Makes sense do they not? Using a hooklength that the fish cannot see. While that does make sense using something that may break at any given moment doesn't to me !

I started using fluoro’s when I got a spool of 12lb Berkeley Vanish from the States after reading how good it was. It was during the closed season and I had arranged for a short session with my brother in law at a carp hole. You know the type bang out any bait and run will appear shortly. So with quite a few pre tied rigs in the rucksack off I went to try this wonder material.

First cast and retrieve and I was worried. There was the hooklength and hook but somehow the hair had gone AWOL. OK try again with another rig. Delkims bleeped to let me know I had a visitor but before I could strike all had gone quiet. It must be just sitting out there thinking what to do next I thought and struck. There was the hooklength but this time conspicuously absent was the hook. Now I can take a hint so went back to my normal braid rigs and normal service resumed with a number of carp.

I tie all my hooklengths at home so I make certain that I do not rush the job therefore making mistakes that can lead to lost fish so I knew that the knots were sound so what was going on? I tested the remaining hooklengths and they broke between 4lb and 6lb. The spool of Vanish took up residency in the bin and I tried to forget about fluorocarbons.

I did say try to forget but I failed as the invisible hooklength concept is just too tempting to forget. Since then I have been through about five different types. All have failed to consistently break at their stated breaking strain and more worrying is that all bar one have failed to break consistently. By consistently I mean that it may break at 6lb in one test, then 4lb and then again at 8lb. Out of all of them have found one that I am reasonably happy with. The fluoro I use is 14.5lb Grand Max Riverge. As said it does not break at 14.5lb but at least I know it is going to go at around 9 to 10lb. I cannot deal with inconsistency but at least with Riverge I know when it is going to break but I don't think that I can forget bringing back a hairless rig for long enough to convince myself. 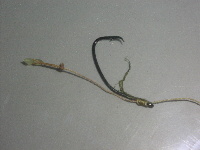 Total faith in braid, even with the opened hook I landed a fish over 12lb !
​
Bob Gill is your next correspondent and I know he has tested more types and more scientifically than I have and is following me so I will be interested to read his viewpoints.

Has anyone else noticed you are more likely to get a bite after recasting than at any other time? Or is it just me?

Shortly after my elders (!) had left, I was into the third barbel of the evening, although in very different circumstances from the first two…I happened to be looking away from the rod, and when I heard the whooshing noise and looked up, the rod was arcing gracefully through the air, and into the river. Bugger not again thought I!

Well up to thirty minutes or so it seems. I rarely cast without some kind of PVA, either bag or stringer, apart from the coldest days when apart from initial baiting, again with PVA, I don’t feed until I get some interest from our whiskered friends.

Looking through the diary only one fish, that I lost!, has been hooked after having a bait in the water for more than an hour this season. An awful night for getting soaked in the rain and having to move further up the bank to keep ahead of the rising river but fantastic for barbel. Odd the way that a diary can help bring the unwritten details like getting wet to my waist as the normally dry stream bed was a lot deeper than I thought when going home but that is for another day.

Thinking back this recasting theory has more history than this season I can remember quite a lot of fish that have appeared in the net after recently recasting.

Could it be that barbel come across a bait that wasn’t there before so is not suspicious and eats it? Could it be that with the introduction of more free bait to that introduced before does the job it is intended and draws in more fish therefore increasing competition for food reducing the importance of suspicion and the fish eats it?

I would like to think that it is the competition element that leads to this phenomenon but suspect that those that follow may disagree or have a more lucid explanation. 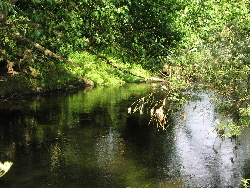 Don't forget to enjoy the view​
Well that's it for the first letter. The next one will be online in two weeks. If you want to contribute let me know.