The first fish of the challenge was caught on 24 October and the 50th at 3pm today. Back home in time for the rugby too. I'm completely over the moon. 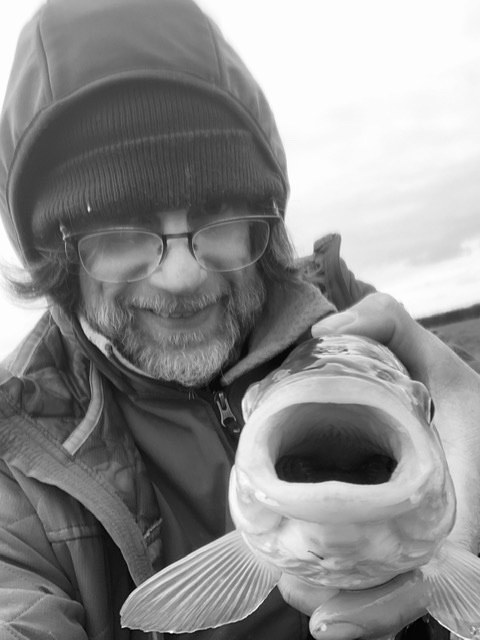 Cracking photo Ed and congratulations on the completion of your challenge.
Can’t help but love chub, there ain’t much that big gob won’t easily swallow without even touching the sides

I wouldn't bother reading this unless you are stuck on a train or are self isolating and have some spare time.

Ordinarily, this challenge should have been comfortably met. 50 chub over five months is a modest aspiration even after the negative changes rivers have suffered. However, it was the floods and various storms which made this task difficult.

The purpose of the challenge was to make myself fish a range of venues on the Upper Thames and spend more time on its tributaries. The rules were simple: after catching from a swim I could not return to it during the challenge; I had to fish a different stretch (north bank/south bank, etc.) each time I ventured out.

Repeat captures are common on the Upper Thames. There are swims where you can regularly catch the same fish whatever the season or weather. Moreover, I did not want to rely on banker swims.

I made the most of the clubs offering winter permits which are good value for autumn and winter river anglers like myself.

As time passed and I was only picking up the odd fish here and there the pressure began to mount. I ended up taking the challenge very seriously. Being a completist I HAD to catch 50 chub according to the rules I set myself - or die trying.

Setting off in the dark in freezing cold rain took a lot of self motivation. However, it was the wind which defeated me on two occasions. The floods certainly limited my options but I still discovered some great new places and rediscovered some long forgotten ones.

Blanks were crushing and a single fish began to mean everything. Bites became so uplifting. If I didn't get one within 20 minutes I moved on (I ALWAYS abided the phone alarm). Fishing after a fruitless day often meant I cocked up the next bite by striking too soon, too late, or even not at all.

Some facts and figures: I spent over 300 hours fishing; 40 trips; fished 3 tributaries and 24 different Thames venues; blanked 4 times; mostly used bread, cheese paste, and meat; tried pellet and maggots once - caught no fish of any species on maggot; trotted a float once on the single day the wind allowed but to no avail; the only other species I caught was a small pike when retrieving bread flake; 13 fish over 5lb and 20 over 4lb; lost 19 hooks and 11 leads; on the main river I could only fish along the near edge up against features; the bigger fish were caught using a John Wilson paternoster set up; encountered otters 11 times - on one occasion there was an otter on the far bank looking at an otter on my bank; wildlife - a badger, water vole, hawks, owls, deer, herons, king fishers, and so many more cormorants I have seen in any other season.

I had a few strange human interactions including: 'Would you mind keeping an eye on the kids while we pop into the pub for a drink?'

It was definitely worthwhile and I learned a lot and in future will not hesitate to make the effort to fish further afield. The tributaries are special. The main river is quite bleak and baron on the north bank. It's width is expanding at a surprising rate. The ever increasing number of moorings is staggering.

In normal conditions I'm sure the challenge could have been met in around 20 visits. The original plan was to achieve the target and return to places where I fancied roach might be. Next season I will search for my holy grail - an Oxfordshire barbel before sunset.

I was neither stuck on a train nor self isolating, but I read anyway! And I’m glad I did - very enjoyable! And so much of what you said reminded me of all the hours I used to spend on the upper Thames. Great fishing, well done

Excellent read Edward congratulations on your conquered quest. My aim is for a berbel this year a biggen would be great but happpy with any size fish.

Congratulations on your determined efforts to yield success.

Great read and dedication to the cause Edward, the 'No returning to the same swim' rule and Flooding makes it some achievement.
You must log in or register to reply here.
Share:
Reddit Pinterest Tumblr WhatsApp Email Link
Top