I’m looking for some scales, not too expensive, preferably dial scales and accurate

www.anglingdirect.co.uk
I came into this life with nothing.... And I still have most of it left

I have some reubens in 30lbs that I have used for years. I bought the Wychwood t bars last year and for an electronic they have been excellent.
Don't ask me where I caught them.

There have been threads on BFW before regarding scales . Personally I have stuck with Reuben Heaton dial scales 60lb x 1oz , fairly bulky and relatively expensive but robust and very accurate . If you want more lightweight I would go for Avon dial scales , not sure if they are made anymore but plenty around on e bay they are robust relatively small and accurate . As for the 3000 series lightweights I took a punt on these a few years a go I had to send them back x 2 as they were miles out so gave up , I may have just been unlucky . I would avoid electronic scales , although accurate in ideal conditions , they can conk out suddenly with batteries dying and can prove inaccurate in extremes of temperature
D

Thanks for the replies

I do have a set of really cheap Chinese electronics scales, they’re actually very accurate but I’ve had electronic scales before and I’ve seen what happens when you leave the battteries in or they get wet.

personally I would stay well away from second hand obsolete Avon type scales that you cant get spares from ! or get repaired or recalibrated some people are looking at them with rose tinted glasses as the accuracy after years of use simply cannot be relied upon

I use Reuben specimen hunter classics now after years of owning crap scales dial and digital.Bulky at 800G but totally reliable.Should pick up a decent used set.
I remember a 2 night end of season session on the Thames and a mate landed a big Barbel and spent the next 15 minutes faffing about with his Fox digital's that kept cutting out, couldn't remember how old the batteries were and cleaning the contacts helped but he lost confidence in them and used mine.
16.7 PB

My Avon’s are 20 years old and weigh 2oz under, but I know that, so it doesn’t bother me. I use Reuben Heaton digitals for smaller species ( very accurate) and also have a set of Flyweights which I have very little confidence in - very sticky ! You get what you pay for with scales imo.

Am I right in thinking that you can send Avons away to get serviced?
I'd rather be fishing

Staff member
Had quite a few makes of spring and digitals.
Never found anything as accurate as Electro Samsons. A very close second are these (now discontinued). 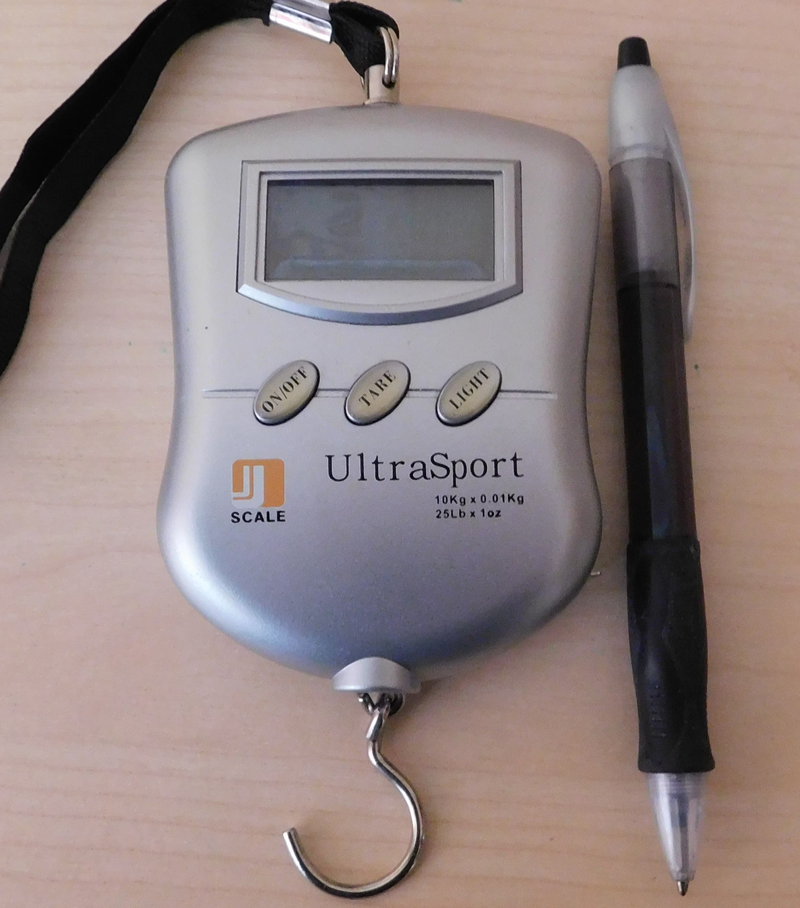 My UltraSport scales have been excellent - wish I could get another set.

Reading this i’m glad that i’m not the only one to had a problem with RH 3000 Flyweight! I’m lead to believe that the early models were spot on but the pair that my son and I had were shockers...They both weighed out by a country mile compared with my RH 9000 electronics which when crudely tested were very accurate. My son caught a known Medway Barbel a week after I had banked the same fish and told me a weight over the walkie talkie. When he described the fish I told him to rest it while I popped the half mile down the bank and weighed it on my then new RH 9000’s....His Flyweights were weighing over a pound light when I weighed the fish on my 9000’s. To his credit the fish he caught earlier that evening at 9-11, if I remember correctly, stayed as 9-11 with no allowance made for the proven light weighing. “weighed 9-11 when I weighed it so 9-11 it is” was his retort....needless to say both his and my Flyweights were put in the plastic recycling when we got home.

That’s what I’ve got, il be well happy if it turns out they are about 25% pessimistic... :lol:

Staff member
Scales can be accurate over a certain portion of their range but 'out' at other sections of the scale.
Using a known volume of water is quite a useful way of checking scales reasonably accurately.

As long as they are consistent I’m ok with that, I only compete with myself.

Ian Murfin said:
Am I right in thinking that you can send Avons away to get serviced?
Click to expand...

I am now under the impression there are no spares for the Avon fishing scales and Avon are now part of
Metroweigh Ltd.

As Nick says, Avons must be the best there is, despite their age..mine are over 20 years old, weigh up to 40 lb amd are accurate as they come when zeroed.. I have a large piece of "pig" iron that weighs 6-1/2 lbs, I took the iron to the local post office and asked them to weigh it on there parcel scales, which they did, I then wrote on the iron its weight.. I did the same thing with a larger piece, so now I can check the scales at two seperate weights any time I like, the Avons are always bang on after being zeroed, with a damp weigh sling hanging off the scale hook, or not

I also have some digitals, but they are a pain as they divide each pound up into 100 parts , instead of into pounds and ounces, they are accurate enough when tested on the above weights, but it is a pain having to convert however many hundredths of a pound they record into true pounds and ounces weight. I have drawn up a conversion table, but its still a pain.

David Craine said:
I also have some digitals, but they are a pain as they divide each pound up into 100 parts , instead of into pounds and ounces, they are accurate enough when tested on the above weights, but it is a pain having to convert however many hundredths of a pound they record into true pounds and ounces weight. I have drawn up a conversion table, but its still a pain.

The Electro Samsons and JScales I have previously mentioned have the option to weigh in pounds and ounces as well as kg and g. Other makes as you say only weigh in kg and decimal fractions which I do find a pain. Some are also inaccurate :-(

Bob Gill said:
The Electro Samsons and JScales I have previously mentioned have the option to weigh in pounds and ounces as well as kg and g. Other makes as you say only weigh in kg and decimal fractions which I do find a pain. Some are also inaccurate :-(

Are these the same scales as you recommend?

Staff member
Hi Andy,
No, the ones in your link above were the newer model that replaced the ones that I recommended.
Different in appearance and IMO performance as I bought and tested both sets. The black ones were inferior.
Cheers
Bob.
You must log in or register to reply here.
Share:
Reddit Pinterest Tumblr WhatsApp Email Link
Top