Staff member
No doubt some of you will be wondering why I am now writing a monthly diary for BFW, so let me explain. Basically, after banking a few decent fish last season and the fact that I am still under 40, have most of my own hair, teeth and take less than 20 minutes to take a leak, my agentâ€™s phone just hasnâ€™t stopped ringing. Life these days is hectic, with one public appearance after another. Do you know Iâ€™m attending the unveiling of the new Mavis Bagenderby Primary School minibus this month and in September Iâ€™ll be judging best parsnip at the Scrotby harvest festival and helping out on the tombola. The minibus is going to be up on a ramp and launched cruise liner style with yours truly doing the honours with the ribbon and champers. Canâ€™t wait. OK, OK, enough nonsense, I grovelled and begged Andy to let me write a diary for BFW, so what. Not sure why, but I did.

As I start out on my first post, I can almost hear the mutterings and sniping from Statler and Waldorf (Muppets hecklers) from the upper tier : "He caught a few decent fish last year and now he thinks heâ€™s a bl**dy expert" Well fear not, Statler and Waldorf, because my diaries are not intended in any way to be a how to catch barbel the Nick Coulthurst way, I am well aware there are countless anglers regularly visiting BFW who are better qualified to do that job. What they will be is an account of my season with some light hearted nonsense thrown in. Hopefully of interest to some on BFW.

Being that sponsorship has been a rather hot potato on BFW in the past, I thought it only fair to disclose who I am sponsored by, as I donâ€™t want it to come back and haunt me later on. The photo below was taken at my last promotional event and as you can see a number of companies have managed to get a piece of me., namely Anne Summers, Max Factor and those giants of the automobile industry Volkswagon. Obviously I donâ€™t wear that exact get-up when on the bank, as I find a matt lippy much more appropriate when stalking spooky barbel in bright clear conditions.

If you think you recognize me on the bank, please be absolutely certain before approaching, because if it isnâ€™t me in that get-up, you could end up getting more than you bargained for and for longer than you thought humanly possible. Itâ€™s never a pretty sight seeing a grown man hobble back to his car, calling out for his mummy with tears in his eyes. I know it may seem odd to some that there arenâ€™t any fishing tackle sponsors involved, but alas barbel fishing has gone much the same way as soccer, all haircare, sunglasses and lippy, which reminds me, my sarong needs picking up from the dry cleaners. 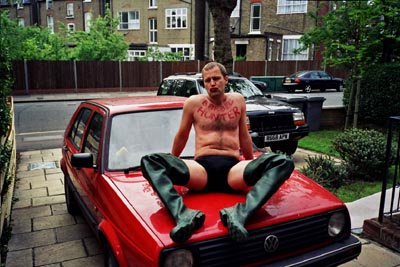 I have to say I am actually very fond of the old Volkswagon Golf, which has managed countless trouble free journeys up and down the UKâ€™s barbel lanes. It is fondly referred to by my missus as the bait box, due to the unholy smell it emits, and costs me almost as much in Magic Trees as it does petrol. I know it sounds daft, but you know how excited you get as a kid when you first step out onto freshly fallen snow and hear that crunching sound underfoot, well I get the same feeling when my fishing mate crunches five months worth of Ginsters pie wrappers in the footwell of the VW, just as we set off on a fishing trip. What lives in that footwell during the fishing season is probably best left a secret. One mate who I gave a lift to, reckons he had his ankle bitten by something living in there.

With the fishing season a fortnight away what am I doing at the moment ? Well in May and early June I tend to spend a lot of time driving round the country looking at new venues to fish in the coming season. Researching new venues on the net or by word of mouth and then going and driving round and taking a look at them can pay huge dividends. Quite often youâ€™ll be able to observe barbel on the shallows, locate weed beds, deep runs and also get an idea of how heavily fished the venue is by checking out the wear and tear in swims. If you have the time, get out there and observe, itâ€™s great just being on the banks even if youâ€™re not fishing.

Being observant definitely puts more fish on the bank, but I think people either are or arenâ€™t observant. Some people seem to be completely oblivious of their surroundings. Take my missus for instance, she could share a sidecar with Barry White and still not know who it was drove home with her. She often looks surprised when she looks at me for the first time in the mornings, but I suspect thatâ€™s something else altogether. Her observations are so acute that she once drove her Jeep onto a huge mound of sand on our road, which had been dumped for major roadworks. This "mound" resembled a small pyramid, and was surrounded by flashing cones, you couldnâ€™t possibly miss it. She must be the only person who has run aground on a sand bank, in a car. A kind neighbour came to her rescue and spent an hour and much sweat and tears trying to dig her out, but to no avail. When the police arrived, the exhausted neighbour looked rather agog when they drove it straight off the mound. Turns out it was a four wheel drive vehicle which was certainly news to the missus !

I consider myself to be a fairly observant person but it isnâ€™t always a bed of roses, sometimes you observe things youâ€™d really rather not, the neighbour and the wife in the jacuzzi immediately springs to mind. On my last outing in the car to visit a possible new water, I was checking my rear view mirror when I spotted a young lady in the vehicle behind me with her finger well and truly jammed up her left nostril. Having seen the determination with which she was attacking her nostril I was sorely tempted to follow her, feeling sure she had the winning lottery ticket up there, but after I saw her finger tip disappear into her mouth and her visibly melt with delight, I decided Iâ€™d been mistaken. Funny how people can become consumed by the most unusual pastimes isnâ€™t it. My brother actually grew his little finger nail to about half an inch, to assist him in his nose picking. Now thatâ€™s dedication. Not sure what he said to inquisitive girls, something along the lines of "I play the guitar, but only a bit". I have to admit, I would have appreciated an extra half inch for one of my favourite pastimes, but unfortunately, and several thousands of pounds lighter, I never managed it.

Being observant paid off for me big time at the end of last season. I was fishing a favourite swim on a mild wet evening and after several hours hadnâ€™t had a touch. In the distance downstream I could hear the noise of fish rolling so decided to come out from under my brolly and go and observe. After a while I noticed that the vast majority of action was coming from a relatively short run on the far bank, so decided to up sticks and move into the swim. Despite fishing on late into the night, all I got was a succession of liners and more fish rolling and winking at me. Undeterred, I returned the following night and fished in exactly the same spot and was rewarded with a smallish fish and my PB. If I hadnâ€™t bothered to get out from under my brolly the night before and go and observe where those fish were rolling, I wouldnâ€™t have caught that fish.

Last season I caught a number of large fish, but my average catch per session was actually just under a fish per session. I think I fished about 50 times and caught something like 46 fish, ten of which were doubles. This year, I intend to mix up my fishing a little, with more frequent visits to prolific venues, as the large number of blanks I recorded last year were at times soul destroying, and at the end of the day I go fishing to enjoy myself. I have kept most of the club cards I had last season and added two new ones. The venues Iâ€™ll be fishing this year include the Kennet, St Pats, Loddon, Thames, Trent, Ribble, Great Ouse and a little stream I have discovered. My goal is to record a double off as many of those venues as possible, but if I donâ€™t achieve my goal, it wonâ€™t be a disaster because I enjoy my fishing no matter what. I would also like to catch a double fishing rolling meat, as I have been almost exclusively a static angler in the past, but have recently started using this method and really enjoy it. As for improving on my PB, to be honest I donâ€™t think thatâ€™s very likely, unless of course I go back and catch the same fish again at a heavier weight or target another known fish, but that doesnâ€™t really appeal too much. Fortunately my sponsors donâ€™t demand that I regularly appear in the weeklies with huge fish, they are more than happy for me to appear wearing just a smile and my lippy of course.

Hopefully my next diary post will contain some photos of fish I have caught, but no promises, because I seem to remember I had a disastrous start to the season last year. The photo below is just to remind those that have not managed to get out and walk the banks in the closed season just what awaits on the glorious 16th. 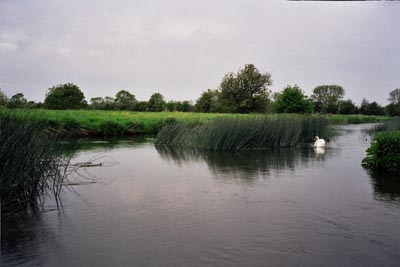 Have a great start to the new season everyone.