Staff member
After Andy Francesâ€™s plea for material a few weeks ago I started to feel a wee bit guilty. Had I not promised an occasional series featuring BFW regulars fishing their favourite rivers at their favourite time of the year? Itâ€™s now December and I have managed to visit nobody. Not good. So for your delight and entertainment I thought I would start an occasional series just going through whatever I fancy at the time really. Be it the original idea of visiting BFW pals, covering something that has come up on the message board in more depth than a normal reply can and the various trials and tribulations that a seldom average fisherman goes through during the season. Read between the lines "whenever and where ever the muse takes him".

Quite a few of you reading this may not have dipped your toes onto the message board as yet, you have a name by the way "lurkerâ€™s" is the rather intimidating term used amongst those that are more Internet savvy though it does sound a rather dark. I think that guest is a far better term but I donâ€™t make the rules so lurkerâ€™s you are no matter what your personal habits. I think that I was one of the first to find BFW along with John Smith and Andy Davies, apologies to anyone I have forgotten, so I am in a rather unique position to be able to tell you what to expect should you decide to get your toes wet. What is most important is that you have good barbel anglers who will help you with most of the problems you are likely to face in your fishing. Canâ€™t get your head around upstreaming ? What rodâ€™s best for trundling ? How does PVA help ? Problems with hooks, bait, making bait, preparing bait, what size lead to what effect does the moon have on my fishing have all been discussed and that is only scratching the surface of what has been covered and I suspect a taster of what is to come. As you may have guessed mickey taking plays a rather large part of day to day board activity but all is meant with no malice and taken just as well. I think it has been that more than anything that has made the board what it is today. I shanâ€™t lie and say that there are never disagreements or idiocy at times but that is what happens when you have an open board. By open board I mean that anyone can register and post, all you need to do is find BFW. That does leave us open to abuse and wind ups from time to time but the thing that surprises me is that the vast majority that come along visit and contribute are all good people. That is the strength of BFW today a core of individuals that happened across a web site started to chat and have a laugh and discovered firm friends throughout the country. 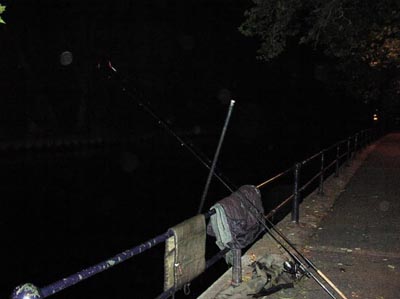 One of the least picturesque venues I have fished but the company of Graham Elliott more than made up for that and the blank.​
This is not mandatory but having met most of the inmates youâ€™d not be disappointed if you take the time to meet them. I have learnt most of my barbel fishing from reading magazines and books also adapting carp techniques to rivers but normally by choice as a lone fisherman. It is not that I donâ€™t like fishing with others it is more of the case that I feel more comfortable fishing alone as I do not have to compromise in anyway what I want to achieve. That is all well and good but with the discovery of BFW I have found that I am revisiting topics I had decided on years ago and finding that I was wrong, well once at least. Having keen minded anglers question what you do, how you do it has made me look at things in a different light and reading their thoughts has opened new areas that I have never considered before. Keep your eyes on the board you never know what you may read may lead to that fish of a lifetime.

Talking of fish of a lifetime that has been the main problem with my season so far. After a few years of quite happily going out for bites and whatever fish results I have found an overwhelming urge to have a go at beating my personal best. Urge? Who am I kidding I seem to be driven by a fish that will beat a certain number. When viewed that way it seems rather ridiculous but I canâ€™t deny that this has been the focus of my season. As a result I have only really been fishing areas that I know can produce fish of the size I want so things have been very, very slow with a lost fish of around 15lb being the high/low light. Fellow Moderator Andy Davies will be able to tell you how slow the areas I am fishing are, as he seems to be convinced that there are not actually any fish there at all! I have had a few fun sessions like a three day trip near Oxford combined barbel/cat fishing that saw a dozen fish on the bank in fairly short order. I missed a double when a suicidal 7lb fish appeared out of nowhere to steal the bait from under the nose of the larger one. A litany of blanks fairly well sums it up but as I right we are now in the beginning of the serious season for big fish and with the right tactics, bait application and watercraft hopefully I will have that fish cradled in my arms before mid March. Certainly will not be from the lack of trying.

It is fantastic that so many BFW regulars have smashed their personal bestâ€™s this season. Off the top of my head the list includes Lyn Hurst, Dick Dowing, Neil Harding Deans, Graham Elliott, Andy Davies, Del Jarman, Ray, Steve Richardson and quite a number more. I could regale you with more information on various captures but it is up to the proud anglers to decide whether their stories remain private. 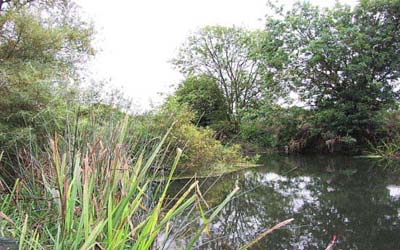 "Above Bedford" not much watercraft needed here.​
These topics just seem to keep rolling into one another and privacy is one of the things I wanted to talk about. Now I am going to be doing my best for these pieces not to read like a litany of captures but to cover what I am doing, thinking and the general pain that you go through in a barbel season. Now you may have noticed in the last few years I have been contributing to BFW I had not exactly shouted about my catches apart for the odd one that taught me something and intend to continue not to so. I catch a few fish, well not so far this season but generally that is a fair statement, but would rather not talk about it all the time as it is thought that catches fish more than any other factor. Bait, tackle, watercraft and other bits and pieces all play a part as well and these are the areas Iâ€™ll bore you with as well. Better clear up something from the start if I use a product I will mention it by name. I have noticed and I am going to expect criticism of people that do this. I have wasted quite a bit of money in the past on some awful tackle so if I can save you money by telling you what I use I will.

As we enter the new year I would just like to thank the inmates of BFW for making 2002 such an entertaining year for me. Of course there have been lows as well as highs but those come no matter what you do so just learn the lesson and move on. I will just take the time to thank a couple of people that have greatly increased the fun of fishing this season though. Without Andy Frances there would be no BFW. How he manages to run BFW in combination with a hectic work schedule that seeâ€™s him jetting around most of the planet it seems is a wonder to behold. A bit of a mystery until you realise that his lovely fiance Claire also willingly lends a helping hand. Andy Daviesâ€™s move from the West Country to Cambridge has seen us on the bank together quite a few times and his quiet understated sense of humour and bream diving, ask him!, has me chuckling to myself when we meet. Time spent fishing and talking with Dick, Keith and Graham is never a waste of time and usually rather funny. I was talking to someone that visits BFW on the bank a few weeks ago and I mentioned Bob Gill and the person I was speaking too laughed saying that I spend most of the time having a go at him. Is that true? Well if it is he deserves it! Only kidding. Barely a few days go by without me reaching for the phone to call Bob with some hair brained idea or scheme to do x, y or z and he listens with great concentration then picks it apart analytically driving to the good parts of the idea. I think it would be fair to say he has had a greater influence on my fishing and I suspect that I have had a bit of influence on his over the last two years than anyone else.

So to all those that I have spoken to, fished with, emailed and generally hassled Happy New Year for 2003, remember make it large!

Have fun till next time.