Fishing on Islamorada with Dave Plummer, my June the 16th

Staff member
Fishing on Islamorada with Dave Plummer, my June the 16th

What follows is an account of some of my fishing adventures with Dave Plummer and others on Islamorada, in the Florida Keys always on or around June 16th, I hope you enjoy my ramblings!

Fishing for Tarpon is very addictive and hard to put into words; we use mainly live crabs or Mullet, in various states of consciousness. Drifting with live crabs is initially a more sedate affair and requires a lot more concentration than live baiting with Mullet. Both methods though result in the same nerve jangling, body melting electric shock when a 100lb+ Tarpon is hooked and jumps 10 feet in the air 10 yards from the boat. Then the noise they make when they re enter the water an experience you will never forget!
To get the Mullet Dave throws a cast net which involves skilfully sneaking up on shoals of Mullet (in spite of my boat driving ability) throw the net and then trying to get a boat full of finger spiking flapping fish into the live well as soon as possible. Getting the bait in my opinion is a sport in itself! Dave refuses (rightly so) to pay $5 a Mullet from the tackle shops. You soon see the advantage of this when you first lose half a dozen live Mullet to Barracuda in less than half an hour.

Live baiting involves anchoring up in the right place with a good run of tide and chunking Mullet off the back of the boat (ground baiting with chunks of mullet). You then fish with a 2lb lip hooked live Mullet 10 yards off the back of the boat under a cork ball float, just smaller than a golf ball. I feel it is important to mention at this juncture I have let my membership of the National Mullet Club lapse, for obvious moral and ethical reasons (although I have caught more Mullet in Islamorada than I ever have in England).

You then â€˜touch ledgerâ€™ for want of a better phrase. When the Mullet becomes agitatedâ€¦. More so than just annoyed at being hooked through the lipsâ€¦. Get ready!! Sometimes you will see a huge silver flash, which is a Tarpon â€˜having a lookâ€™ Other times the tarpon will fly out the water after the mulletâ€¦ often they miss having two or three goes before they get it. The line goes tight and the multiplier starts giving line at an alarming rate. Dave than always shoutsâ€¦ Wind! Wind! Wind! So rod down and wind like mad to set the circle hook. Do not strike or you are going to be on the receiving end of a lot of **** taking. When the fish is hooked well practised mayhem ensues, the other rods are reeled in, someone throws the anchor whilst you watch helplessly at a very angry Tarpon jumping multiple times, disappearing towards the horizon. Then itâ€™s to the front of the boat and the pain begins. Using 40lb class rods with 40lb line and 80lb+ fluorocarbon leader it still takes half an hour or more of full on pressure to get a 100lb+ Tarpon to the boat. They just donâ€™t give up!

Drifting with crab baits is the same but an altogether different affair. It involves drifting with the tide across an area that contains Tarpon with a hair rigged swimmer crab under a cork float. Now a bite on the crab is so subtle and gentle that they canâ€™t be tarpon can they? If you have ever touch ledgered for spooky chub, registering only a tiny pluck on the line thatâ€™s what a 170lb Tarpon does. Dave describes it as a Trout gently taking a nymph as soon as you feel that gentle pluck wind like mad and you are on! You then have a flying Tarpon dropping into the water making a noise akin to a cow being dropped from the sky. 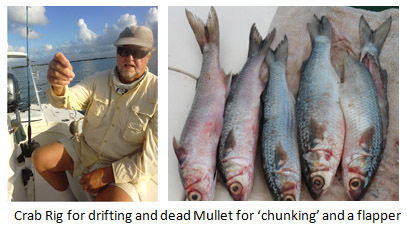 Or alternatively â€¦.. Was it a bite? â€¦. Was it weed? â€¦.. Ok reel inâ€¦â€¦ oh **** Iâ€™ve been shelled. Dave says â€œIâ€™m sure youâ€™re good with animalsâ€ (some reference to a circus and being a Clown maybe?). At times Iâ€™ve been chatting away between bites and paused mid syllable my brain not fully registering itâ€™s a bite, Dave shouts â€œthatâ€™s a bite, Wind! Wind!â€ or words similar. 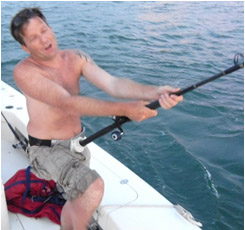 I havenâ€™t mentioned dead baiting for the Tarpon yet, this is with a sleeper rod, used when anchored up live baiting. The technique involves a small weight a long leader and a mullet flapper, which is then cast off the back of the boat and the multiplier is set to free spool.

We always take it in turns for runs, so if I had just caught a fish and hooked another Iâ€™d pass the rod to the other angler and vice versa. This ensures the fish are spread evenly between the two anglers, as well as minimising the risk of a cardiac arrest.

When I had a fortnight on my own with Dave, at times, I had hardly any chance to catch my breath and grab a drink before we had hooked another Tarpon. On more than one occasion on a four hour session I called time early, I had battled with four, 120lb+ Tarpon and couldnâ€™t physically fight another one (about 20 to 30mins per fish). For those that are interested in numbers (Bearing in mind we spent at least two days a week back country Shark fishing) we averaged fifteen, 100lb+ Tarpon to the boat a week, with as many again hooked and lost during the fight. We have had very large Tarpon bitten in half during the fight; usually the culprits around Islamorada are 13 foot plus Hammerheads or massive Tigers, a sight you donâ€™t forget in a hurry.

Florida Law states that you are not allowed to bring large tarpon onto the boat for trophy shots; this is to protect the fish from damage.

Then there is the back country fishing which is the opposite side to the Atlantic, here is 100 square miles of flats and channels up to only 10 foot deep. The Back Country is Shark country! This can involve a trip of 26 to 30 miles, nearly to the Everglades, stopping only to catch some fresh bait fish with light jigging rods, which supplements the Dolphin, Jack and Barracuda from the bait freezer.

Dave knows several good areas (tide dependent) where you can catch numbers of small Sharks (relative term!) or alternately sit it out for a possible monster, again another amazingly exciting style of fishing. Imagine seeing a large dorsal fin slowly moving up the fish oil slick and then one of the rods screams off. We have had runs off of 10lb Jack dead baits before, only to be dropped and then reeling the bait in and seeing the huge teeth marks. One day this summer Ken, Dave and I went to a spot 26 miles out, we had 40 runs in the session landing 17 Bull Sharks up to about 250lbs this was in about 5 hours of fishing. Imagineâ€¦.. screaming run number 25â€¦.
â€œYou get this Kenâ€ I say,
â€œNo Neil itâ€™s your turnâ€ Ken wearily replies
â€œYouâ€™re closest Kenâ€ I sigh,
Dave pipes up â€œFFS someone get it will you!â€

When fishing the back country I have caught Tigers, Bulls, Lemons, Black tips, Spinners, Nurse Sharks as well as Sting Rays. In the last few years Dave has ditched the wire trace for Sharks and uses a mono leader with a single circle hook this really increases the numbers of runs . Having the multiplier in free spool, the shark runs off at a rate of knots, click the reel into gear and wind, and do not strike.

Itâ€™s also worth mentioning the many species you catch when jigging or bait fishing whilst waiting for a run; Including many types of Snapper, Lady fish, Jacks, Needle fish, Trout, Pompano and Catfish to name just a few. You could also spend a day fishing for Snook with live Pinfish if you so wished.

I have also caught a huge Permit (40lb) when drifting crab for Tarpon, which was very nice. We had spent some time every day for over a week sight fishing for a shoal of huge Permit that were living near some structure, without a sniff of a bite, which Is not unusual for big Permit. To then catch one in the evening close to where we had been fishing to say I was over the moon doesnâ€™t even come close. 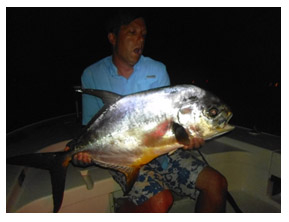 I havenâ€™t mentioned flyfishing because itâ€™s not a method I am anywhere near good enough at to give it a go. But Dave does carry a 10# or 12# weight fly rod on the boat if you want to have a go.
I have met some really nice anglers when sharing the boat, Peter, Ken and Ian were all like minded people, wanting to fish for fish of a lifetime in Paradise. If you do ever have a go be warned itâ€™s hopelessly addictive!
I mentioned paradise and with all my fishing the environment and its wildlife are important to me, a secluded bay on a mature Gravel pit or the crystal clear Hampshire Avon, or if I am really lucky Islamorada. 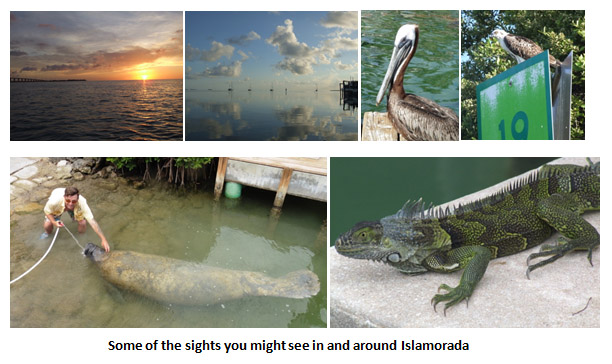