Looking back, I can see why I started testing various lines and other bits of terminal gear. Some time ago when I was a confirmed Maxima person, I had a few puzzling experiences that others have mentioned. This consisted on my beloved Maxima adopting the vexing property for self-destruction over a very short period of time. At first I put this down to having purchased a bad batch, so I replaced the offending line with new and went about fishing. After a short time, I experienced a few inexplicable breakages and decided to look at the breaking strain on a more scientific basis. Not only Maxima would be involved but also a possible new candidate. This started me on an expensive â€˜hobbyâ€™ and seduced by some of the relatively new thin diameter monofilaments had a look at these on my quest. Not wishing to bore you with the details but experiences then and up to date comparisons have led me to adopt a rough rule of thumb for monofilaments. Look at the diameter of the line rather than the stated breaking strain and you probably wonâ€™t get mislead. If for example we are looking at some â€˜standardâ€™ line with a diameter of say 0.24mm and a stated breaking strain of 8lbs and a â€˜prestretched â€˜line of around 0.24mm with a stated breaking strain of 12lbs when tested with a carefully tied appropriate knot youâ€™ll probably get similar breaking strain results!

A final observation concerning my tests is that I test with the terminal gear I intend to use. So if Iâ€™m using size 6 Owner 50188â€™s and size 8 swivels thatâ€™s what Iâ€™ll do the tests with. I also do some tests wet - which can be messy.

Theoretically, with a similar refractive index of water, these lines should be virtually invisible in water. However, most makes are stiffer than the equivalent bs monofilaments, tend to break below the stated breaking strains, are less tolerant to poorly tied knots (and those tightened quickly without the appropriate â€˜lubeâ€™) and are expensive. In my limited experience the fluoro that has impressed me the most is the one marketed by Wychwood , which is fairly supple as fluoros go and is cheap. This brand is aimed at the trout market but is the most reliable I have come across so far. Also, 10lb breaking strain can be relied on to go at 10lb. Having said all this, I will still try to avoid using fluoro lines.

August, the river has been low for a number of weeks and the days hot, bright and sunny. The weed waves enticingly in the current and you are pretty sure there are fish in the vicinity. Itâ€™s around 2 pm and you are getting hot and want to scurry for cover - after all the early morning has moved on and it looks like nothing will be feeding until nightfall. A little way upstream, a number from a herd of cows decide to make their way down to the river for a drink and paddle. You look at the often seemingly stupid beasties, drinking, paddling and a few belly deep are taking advantage of the cabbages. No doubt refreshed by the drink, succulent feed and paddle some get a bit frisky. The water gets coloured with all the antics and the tinge of colour drifts past you. You idly try to peer through the murk and think you see a few of the cabbages â€˜bumpâ€™ unnaturally in the flow. Well, maybe you think and extracting a worm from your bait box you lower the offering through the cabbages. You donâ€™t know whether the bait has gone through the cover and is resting on the riverbed. You decide to wait and not risk any undue disturbance. The rod top trembles slightly and the line tightens - fish on - and you watch the cabbages explode with the action. The cabbages leafs get cut by the line as a barbel bores off. A few minutes later you slip the net under a nice fish of around 8 pounds.

Itâ€™s November, heavy rain and strong winds have done their destructive business. You arrive with the river almost breaking the banks and view the loads of debris washing down. Consigned on this occasion to fish relatively close in you turn to face upstream on hearing a bumping and grating noise. A large tree branch is heading towards you, but rather than floating on the riverâ€™s surface this one is, for some reason or another, is upending and jerking as the lower portion makes contact with the river bed. This strange scene is both captivating and unnerving as it reminds you of the overwhelming power of the river in flood. The scene captures the imagination and my thoughts connect to the Lady of The Lake offering a jerking, gnarled tree branch in place of Excalibur - King Arthurâ€™s sword. The branch ends up downstream of your location and comes to a sudden halt as it is rammed between obstacles as the river narrows. This happens with a crashing and snapping noise and even the force of the water flow fails to wash the branch further downstream. The weather is atrocious and after a thorough soaking from the almost horizontal rain, carried by the gale force winds you decide to head for home.

A couple of days later you are out again and notice that the large branch has remained where you witnessed it coming to rest, albeit the drop in river level has lowered it down some six feet. You recount the previous dayâ€™s experiences to your fishing buddy as you pass. Fishing buddy then announces that he will attempt to fish the new snag and shortly afterwards bumps a double meatball into position. Three nice barbel come out in the next half hour and although you are happy for your buddy, you are secretly kicking yourself for not trying the new feature yourself.

My Mate Paddy With An Opportunist 2​
Further floods followed over the next couple of days and on our return to the river we found the branch gone. Not surprisingly, the barbel had also moved out.

This is something that I find both frustrating and captivating. My local patch often allows observation of barbel, which often leads to â€˜tearing my hair outâ€™ sessions. You have a shoal of barbel resident and are easily observed going about their business. You remain unseen and introduce a few offerings upstream to see if they are interested. After a short wait, a barbel breaks ranks from its companions undercover and purposefully approaches a free offering. It appears to take the first and then proceeds to puff silt whilst on itâ€™s quest for any other food items. You patiently wait to see how things develop and choose the right moment to add some more freebies. Once again the fish appears, patiently you resist the urge to fish, trying to build the fishâ€™s confidence. Finally after a long wait, you introduce the hooked bait which you have taken the utmost care that it will behave similar to a free offering. The barbel returns and proceeds to scoop up what remains, puffs silt and then leisurely departs the swim leaving the hook bait untouched. In the next few hours you try almost everything to no avail. Go home beaten.

Out of The Blue Barbel

This particular example follows on from the â€˜Stealthâ€™ paragraph above. You have located a good double which you decide to fish for. Carefully you build itâ€™s confidence by dribbling in some freebies and decide that your best chance will be as the light fades which is a couple of hours away. The fish moves up to the freebies and then departs into a deeper area downstream for around twenty minutes. It then returns - this goes on until the light fades. You wait for the best moment to introduce the hook bait and wait. The fish returns and in the diminishing light moves slightly further up to the baited area and starts to feed. The line vibrates and then tightens on your fingers and you connect with a fish. Quickly it dawns that this is not a double but one of around 6 pounds that has snaffled the bait.

Not So Stealth Barbel

Early October, you are passing a â€˜well knownâ€™ swim, which has been fished in the previous few days. As the swim is unoccupied, you canâ€™t resist lobbing a couple of droppers containing pellets out on the shallow gravel run. Your intent is to move on and fish the area later - if it hasnâ€™t been taken by another angler. A large barbel appears within a minute of the disturbance and you remember the text book advice to let things settle for later. Now, thereâ€™s a barbel feeding and you canâ€™t resist a cast. Within, a minute you have a fish on and after a brief fight you slip the net under a 11 pound plus fish. You intend to move and introduce a further dropper to keep any other fish that might be there interested. You see another fish over the pellets and once again cast, the welcome result is another double. Now the swim is shallow, your fishing position is rather exposed and the swim has now been well and truly disturbed. The antics of sliding down the bank landing two nice fish, their careful return at the landing area screams â€˜move on!â€™ However, you feel lucky and decide to chance it again. Three hours later and you have a total of seven barbel. Go home happy.

The Swim in Question​
I always look at a swim and ask myself where can I land and return a fish safely before fishing a particular spot. If I have someone else fishing with me, I tend to fish swims that are a little bit more difficult, in the knowledge that my companion can help if required. Fishing these â€˜in betweenâ€™ swims can often have good results. I looked at one swim that was more difficult and almost moved on. My fishing companion tried to persuade me to give it a go, but I was unhappy. He then said something that made sense â€˜Bob, itâ€™s August and the water at the edge is only a foot deep so if you hook a fish youâ€™ll just have to get wetâ€™. I surveyed the scene again and as a bit of a cop out lobbed a ball of stodge (pellets, CSL and breadcrumb) out into the relatively deep channel. Leaving the swim, I moved upstream to an easier area. After about an hour I decided to return and peered over the undergrowth to be greeted by puffs of silt. Trembling, I baited the hook and carefully dropped the bait slightly upstream of the activity. I didnâ€™t have to wait long, I felt the initial tremble of the line followed by the wrap round. A untidy scrap followed and Paddy my mate made his way down the 12 feet bank crashing through the undergrowth, net in hand. A beautiful 9.04 graced the net. After all the commotion, I was pretty sure that this was the end of fishy activity, but the first fish was quickly followed by another of around 8 pounds. Another swim â€˜discoveredâ€™! 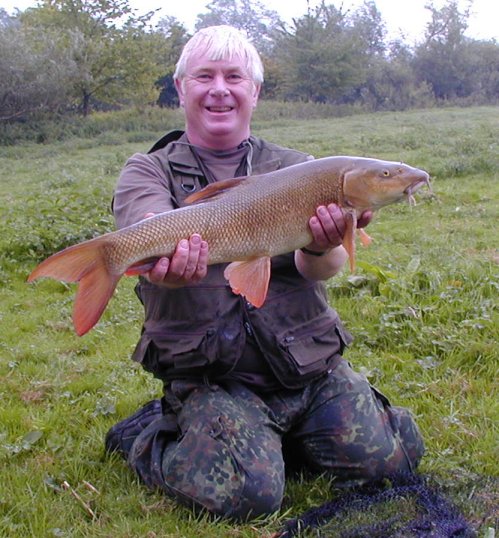 Could Have Walked This One By​
Cheers